Exploring the Nightlife in Mykonos. No matter who you ask, everybody who has been to Mykonos, Greece will describe it as the ultimate “party island.” From bars and clubs, to beaches, to waterfront restaurants, there are very few places in Mykonos’s downtown that aren’t alive and thriving after the sun goes down.  Much like some of the big cities within the United States, such as Miami or New York, nightlife is a staple of Mykonos, and the bars and clubs rarely get a break. Ultimately, this means you could walk into the old town of Mykonos, follow the music, and be led to one of the most amazing parties you’ve ever seen.

Serving as a guide to those exploring Mykonos now or hopefully in the future, here are our top Pointster locations in terms of nightlife:

For people who are all about the party, the Skandinavian Bar is the place to be. But don’t get confused! The Skandinavian Bar has multiple locations just within feet of each other. The actual disco, or club, is located up a flight of stairs, with two other locations for the Skandiavian Bar located just underneath and in front of the club on the lower level. Once inside the disco, you’ll realize that this club is one of the most popular on the entire island, and rightfully so! With a packed dance floor, colorful lights, and loud house music, it is impossible to have a boring night at this location!

For those who like to live life on “the wild side,” there is a great challenge to take on at the Skandinavian Bar. If you can make it up on the bar to dance on top of it, you’ll get a free drink…or at least that’s what the locals say! For those who don’t want to put themselves directly in the spotlight, the Skandinavian Bar also offers a private section adorned with VIP tables, neon light signs, and bottle service. 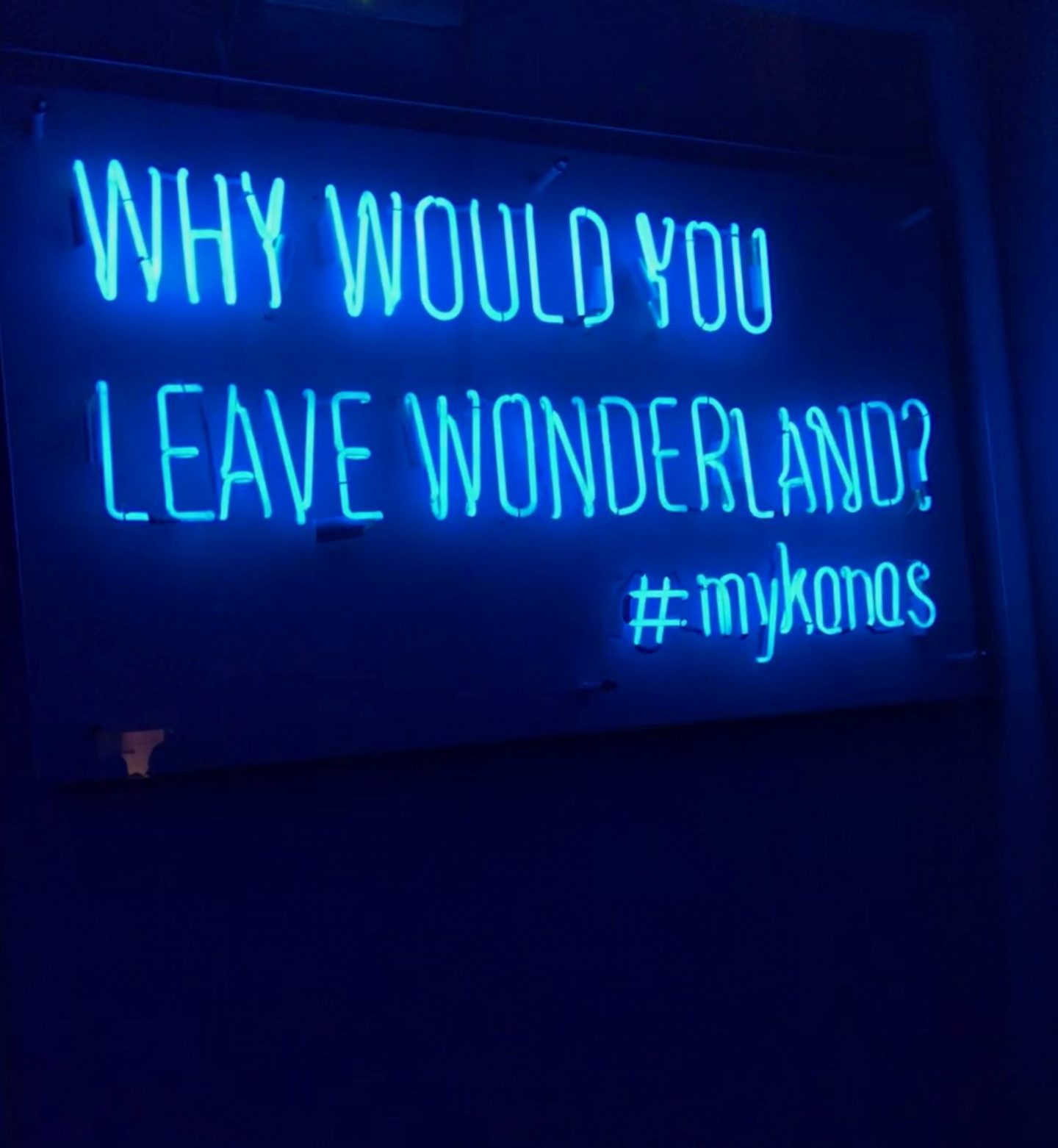 This neon sign is a staple of the Skandinavian Bar that almost any local would recognize. The sign reads “Why would you leave wonderland? #Mykonos” and describing Mykonos as wonderland is right! The best Nightlife in Mykonos.

If you’re looking for a more low-key night but still want to enjoy the Skandinavian Bar experience, one of the bars on the lower level might be the right scene for you. The bars serve traditional drinks, unique shots, and a meter stick of shots for the group that wants to be a little bit daring. Regardless of which location you choose to go to and what you do there, a night at the Skandinavian Bar could never be boring. 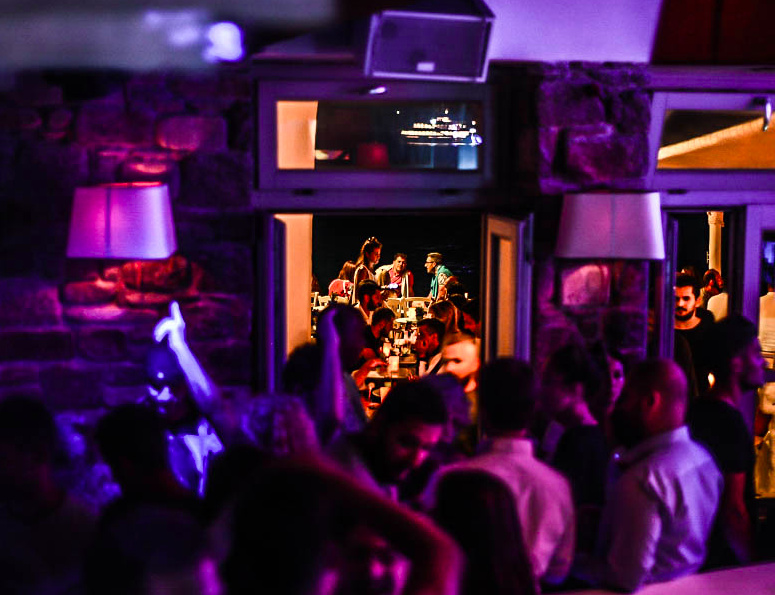 This photo perfectly captures Semeli’s vibe. The lights allow for a party mood and once the music starts going Semeli can’t be stopped! Photo taken from http://semelithebar.gr/new/

Though Semeli is not as big and as packed as the Skandinavian Bar, it certainly knows how to throw a party! Semeli is just one of Mykonos’ many bars that offer great drink deals and an occasional late happy hour starting around 11 p.m. for drinks. During the happy hour, drinks are buy-one-get-one-free, meaning you can enjoy more while spending less.

The dance floor within Semeli is often packed tight with people dancing, drinking, and enjoy music. But for those who prefer to have a little more space to themselves or in their original group, booth style seating is offered within the bar. 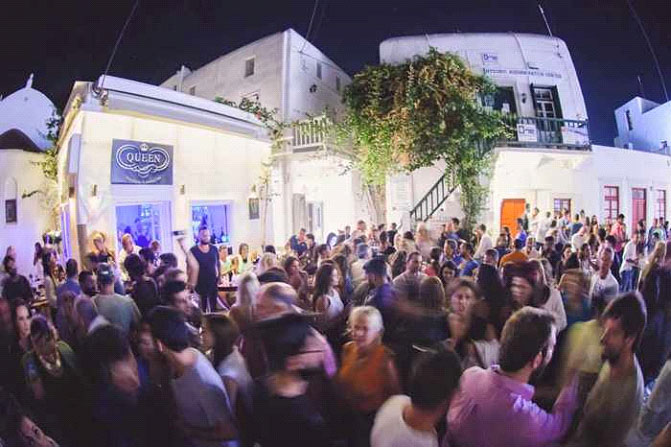 A fish eye view of a typical crowd at Queen. Be sure to grab a table quick! Photo from https://mlv.villas/queen-mykonos-opening-party/3-7/

There’s nothing Queen can’t do! Known to locals as high end, but not pretentious, Queen has become a popular spot for young people to crowd around outdoor tables and enjoy both the Mykonos nightlife and the beautiful scenery offered within the old town.  Queen is known specifically for its signature champagne cocktails and other unique drinks, but many locals use this bar as a stepping stone to the larger clubs and bars on the island.

The inside of Jackie O is chic, minimalistic, and a great background to snap a quick shot! Photo from https://www.jackieomykonos.com/en/town-bar

Everybody knows the name Jackie O, but in Mykonos it has a different meaning. Located just below the famous church of Paraportiani and right on the water, Jackie O’ is known for attracting a huge crowd with their nightly drag shows. The bar has had great success as a gay bar, but opens its doors to anyone and everyone who loves a good party, good drinks, or a good sunset.

Whether you choose to watch the sun set over the sea or stay all night for drinks, the view at Jackie O’ will never disappoint. A minimalistic black and white interior lines the inside of Jackie O’ to give the bar the perfect lavish look for a night out on the town, or even a new background for an instagram picture.

To see original and authentic posts from travelers and locals alike at Jackie O’, search the tag #jackieomykonostownbar on Instagram! 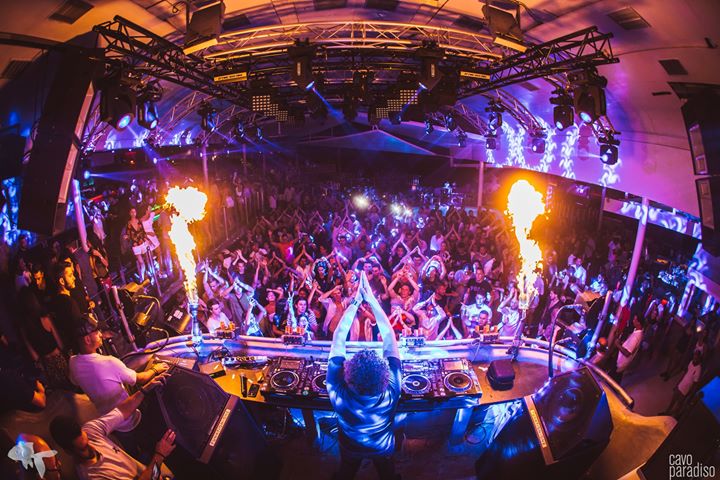 Hands down, Cavo Paradiso is the most widely talked about nightlife in Mykonos. As (seemingly) the most popular club in all of Mykonos, Cavo Paradiso is a must-experience for anybody traveling to the island who enjoys nightlife. With open-air dance floors, a “floating platform,” and DJ sets that don’t end until the morning sun comes up, it goes without saying that Cavo Paradiso is popular for a reason.

Artists like R3hab, The Chainsmokers, and Alesso have or will perform at the club, meaning you could find a celebrity during just one night out at this club!

*(For a running list of artists who have performed at Cavo Paradiso, check out their website: https://www.cavoparadiso.gr/about.asp).

Nonetheless, Cavo Paradiso is a spot for those who love music, DJs, and lights. If you’re looking for a low-key night, this may not be the place to go, but it’ll certainly show you why Mykonos is known as the party island. 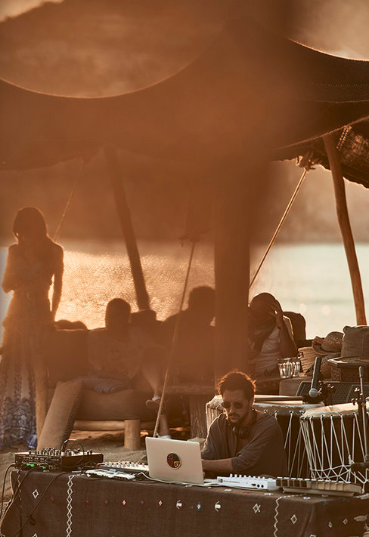 Let’s take a look into the party scene at Scorpios. Photo from https://www.scorpiosmykonos.com/gallery

Don’t underestimate the power of a Mykonos beach club—Scorpios is also one of the most widely known parties on the island. Scorpios is known for their party scene for the late afternoon, throughout sunset, and into the night.

Scorpios offers tables, pillow-style seating, and traditional dining options, as well as a bar. Regardless of which one you choose to go for, it is guaranteed that you’ll enjoy your experience.

With bottle service and endless music at Scorpios, it’ll be hard to spend late afternoon anywhere else after your visit!

Heres a pro tip if you’re looking to go to Scorpios: always make a reservation in advance! About